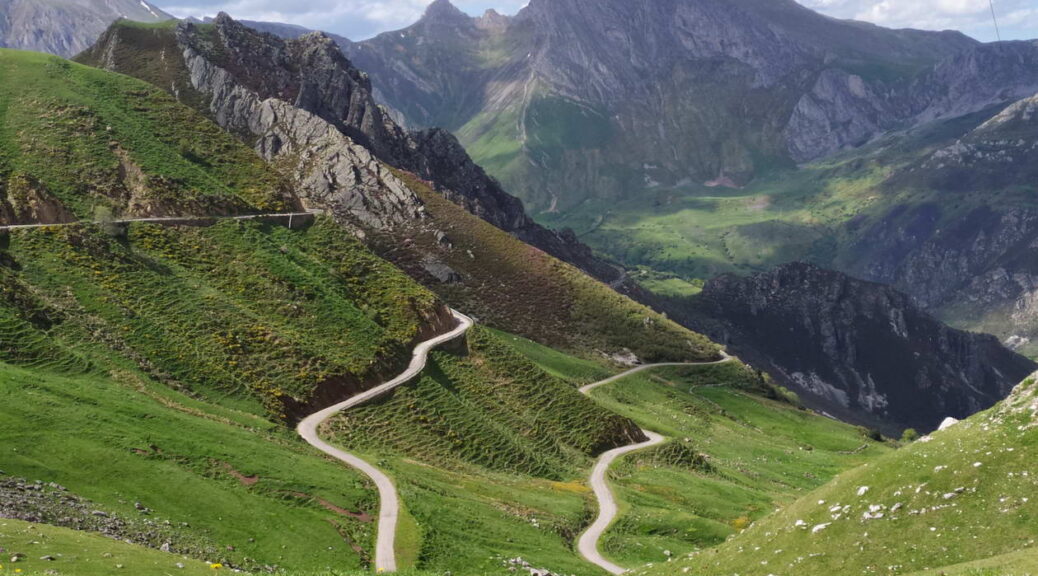 Lena council is a place where you want to ride a bicycle, both for those of us who live here and for those who come to visit us. It can be considered as the most privileged place in our country to practice cycling, since here we find the most important and well-known peaks, where at some point in history exciting feats were experienced in this sport. And all of them of great scenic beauty.

* You can visit all these contents on Lena’s website: Lena: Destino Ciclista

In Lena, cycling races have been present since the middle of the last century, but without a doubt the presence in the Vuelta Ciclista a España has been the most significant. On more than 30 occasions La Vuelta passed through Lena, seven times it was a stage finish and on one occasion, a start.

Although it is not in the Lena town hall, we do have it close by. The Angliru is the great colossus of Spanish cycling.

From La Vega L’Angliru starts like many more ports in Asturias: hard and very hard ramps combined with other easier sections to tackle. So it will be until Via Pará. After an almost flat section at the height of the recreational area, the road climbs straight up to the sky, from there we can touch the granite peaks of the Áramo with our hands.

As soon as we finish Via Pará the first wall: Les Cabanes, a double curve that will “tell” us if we are in a position to face what remains or it is better to leave it for another time, since the slope here reaches 23%. If we have passed Les Cabanes with more or less difficulty, after a small respite, the road stretches, becoming almost straight for a little less than a kilometer, with an average close to 15%, little, if we are talking about Angliru. In this way we will reach the curve of Llagos, which will give us another brief respite, to once again look at the sky, again above 15% until we reach the Cobayos area. And from then on the real hell: Cueña les Cabres. Almost a full mile of agony. A kilometer because they have told you that it is a kilometer, because the feeling is of having traveled ten. Overcoming the section of La Cueña is to have overcome the Angliru, but do not trust us, since the port will immediately put us back in our place when we reach L’Aviru. Again above 20%, and an extra prize before crowning with les Piedrusines to finish, the last zone of horseshoes before reaching the top.

La Cobertoria is a port of special hardness. It starts from the center of Pola de Lena and consists of 10 kilometres, with an average gradient of 9%. It is a constant slope from the beginning, without falling below 8% in much of the ascent and in the central area it reaches percentages of 12 and 13%. The last 500 meters are bearable on a false flat.

Crowds of cyclists test its ramps daily and on weekends and in summer the number of fans who cycle through this port increases considerably. It is also very common to see professional runners training here, since the percentages described are very favorable for the heats they are forced to do to get a good point of form, especially when they have to prepare for the grand tours.

The Gamoniteiru from Pola de Lena is an impressive climb. The summit is crowned in the council of Quirós and is close to 1,800 meters in altitude. In its 15 kilometers, it covers 12.5 kilometers in Lena and the final 3.5 in Quirosano territory.

This is the ascent of La Cobertoria linked to the paved track that reaches the antenna of the Gamoniteiro Broadcasting Center, from where the television and radio signal is supplied to all of Asturias. Of course, this final part is very narrow and at the top there is little space, which had prevented the end of a stage of the Vuelta a España until now. For this, works were undertaken in order to expand space at the top and since the asphalt from La Pola to the top is impeccable, this 2021, La Vuelta will finally arrive at this port.

A true colossus with numbers equivalent to the great ports of the Tour and the Giro. The more than 1,400 meters of difference in altitude are impressive, with an average slope of 9.65% (for 15 kilometers), highlighting that between kilometers 1.8 and 7.5, the average is around 11.5% (almost 6 kilometers in a row).

Despite its hardness, it is worth noting the beauty of the ascent in its last 6 kilometers, with a narrow, hard road, but crossing areas of Mayans and meadows, which precede a limestone landscape, which loses vegetation as we approach. to its top, similar to the mythical French Mont Ventoux, including the antenna at the end. To which must be added that agonizing last kilometer with percentages of 13, 14 and up to 17%

Alto de La Cubilla, in the Natural Park of Las Ubiñas-La Mesa, one of the Biosphere Reserves in Asturias, is undoubtedly one of the most beautiful ports in the region. Located in the Huerna valley and surrounded by majestic mountains such as La Tesa, La Mesa and La Almagrera, which watch us from our left for much of the ascent and to the right, El Fariñentu, Los Fontanes and the white queen, Peña Ubiña, which With its 2,417 meters high, it is one of the highest mountains in the Cantabrian mountain range.

The location, the landscape and its length, almost 30 kilometers of ascent, mean that it is constantly compared to the alpine passes that we usually see on the Tour de France route.

We enter the valley in Campomanes, five kilometers from Pola de Lena. In its first part it is very affordable, without being particularly harsh, which is why we can consider that the port itself begins in Los Pontones, 18 km away. for the high It is from there where the hardest ramps of the ascent are found, which can exceed 10% of unevenness.

We make the steps through the towns of Telledo, Riospaso and Tuiza surrounded by native vegetation, the oak groves that protect us in summer begin to disappear from the last town to give way to a high mountain landscape, until reaching the top at 1,683 meters of altitude.

HIGH OF THE CORDAL

El Cordal is a serious pass, not very long, but an important pass that has always served as a prelude to the end of the Algliru stage.

They are 5 and a half kilometers at 9.3%. As soon as we start we find a ramp of 11% for 200 meters, to continue with a constant ascent of smooth and staggered slopes. Already in the second kilometer we have a zone of a thousand meters greater than 10%. Another small break precedes the hardest part of the ascent. In the last 2 kilometres, the ramps always exceed a 10% slope.

The ascent to Espines is a step further, which added to the hardness of the Alto del Cordal, gives one more point, increasing the distance by 5 kilometers and raising the Cordal from 788 meters to 1058 m. that we reached in the Mayau d’Espines.

El Cordal, by itself, is already a serious pass, not very long, but an important pass. It has 5 and a half kilometers at 9.3%. As soon as we start we find a ramp of 11% for 200 meters, to continue with a constant ascent of smooth and staggered slopes. Already in the second kilometer we have a zone of a thousand meters greater than 10%. Another small break precedes the hardest part of the ascent. In the last 2 kilometres, the ramps always exceed a 10% slope.

One hundred meters before crowning the Cordal, we find the detour to Espines – Cuchu Puercu on our left. The narrow road, surrounded by weeds and with worn asphalt, in part of the ascent, marks this beautiful climb that combines areas of special hardness with slight descents, which cause you to face extremely hard ramps to regain altitude.

Combining the councils of Lena and Riosa, it takes us through almost unexplored places to the very foot of the Aramo, just below the Gamoniteiro. The road, which starts at the top of the Cordal, connects with the La Cobertoria road at the height of the Valle de Peral recreational area.

The lack of traffic is a constant and one more incentive for the cyclist who can travel safely through this area.

The Pajares pass has been present in the Spanish round practically since its inception, as it is an obligatory step towards the plateau. It was included for the first time in 1945 and was repeated many times, even in 1965 the goal of an individual time trial was installed there, which started from Mieres, in which the Frenchman Raymond Poulidor was the winner.

Both the Vueltas a Asturias and Valles Mineros included Pajares in their routes, placing the finish line of what used to be the queen stage in both events at its summit.

The Cuitu Negru is the continuation of the very tough Pajares-Brañillín. It is the ascent to the highest part of the ski resort, where until 2012 you could only climb in a 4×4 or on the ski lifts of the winter resort.

In 2011, the Puerta de Asturias Cycling Club proposed that in the project to refurbish and improve the Valgrande–Pajares Station, the tarmac of the track to Cuitunigru be undertaken. In this way, the ascent from Fierros would be extended by 3 kilometres, the latter being an average of 13%, and thus debut this ascent in the Vuelta a España. In addition, the tarred will be a great improvement for the station’s maintenance work throughout the year, so the investment will be fully justified. The Government of the Principality of Asturias accepted this proposal and Unipublic designed a stage for La Vuelta in 2012 ending on this unprecedented peak.

From Puente Fierros, which is where the ascent to the Lenense peak begins, there are 19.4 km of ascent with an average gradient of 6.9%. The last 3.2 km, from Brañillín, are hellish, because the average slope is 12.3%, although many ramps have a 20% and even 22% incline. The last kilometer, especially, is very hard, until then it seemed impossible that it could be climbed by bicycle.

Alto de Carabanzo is a small ‘tack’ in the middle of great colossi. Short and without great slopes, but with great sporting and scenic charm, with extraordinary views of the Sierra del Aramo at the end of the ascent.

HOTEL VIDA SANTA CRISTINA *** (The Hotel of the Cyclist))

At Hotel VIDA Santa Cristina *** we have an exclusive garage for bicycles with a laundry room and a small workshop, totally free for our clients. From the hotel itself you can leave to go up all these historic ports