In Lena you can go hiking from 400 meters to the peaks of some of the most beautiful mountains in Asturias, such as Pico Ubiña, the top of the council with its 2417 meters high.

In addition to the routes that we can do in Lena, in the Parque de Las Ubiñas – La Mesa we can enjoy the Senda del Oso and the Desfiladero de las Xanas.

Leaving the hotel and in a relaxed walk we can discover one of the Asturian pre-Romanesque jewels: the Church of Santa Cristina de Lena. It was built in the 9th century during the reigns of Ramiro I and Ordoño I and declared a World Heritage Site in 1985 by UNESCO. To visit it, it is necessary to make an appointment with the caretaker (Inés Faes) on the phone 609942153.

From the church we go down to the old Cobertoria train station, which has an Asturian pre-Romanesque interpretation center divided into 4 sections: introduction to the classroom, the kingdom of Asturias, Asturian architecture and Santa Cristina de Lena.

Felgueras Valley (2.8 km / 2 hours of walk with the corresponding stops)

A leisurely walk to get to know the Felgueras Valley a little more closely, where the Hotel Santa Cristina is located.

The first section of the route is done along the road that goes up to Felgueras. There are 2 km where we see the different uses of the land and the meadows where cows, horses and sheep graze. At the bottom of the ravine, on the margins of the Valbuena stream, the vegetation covers the margins of the Valbuena stream. Thus we arrive at Felgueras, where we can take a walk through the small town and visit one of the most traditional establishments in the area: Casa María.

The descent is made along the path that connects Felgueras with the Palace. Being careful with the slippery stones on the road, we reach the Palace and cross a small bridge with houses next to the river. We cross the Palace through its main street, with very good examples of popular Asturian architecture, and thus we arrive back at the Hotel.

We leave La Pola, Lena to reach Muñón Fondiru by road where we take a track to the left that runs parallel to the Brañalamosa stream. Between riverside forests and chestnut trees we climb to the town of the same name.

From here, always along forest tracks, there are steeper slopes and flatter areas from where you can enjoy the views of the Muñón River valley. We arrive at Ablaneo where we begin the descent through the ridge to Colléu La Escrito where the route offers us the best views of the Council of Lena, reaching even the Quirós mountains, the Sierra de Navaliego, the Cordal de Urbiés…

We continue down the track along a shady, wet and muddy path but without difficulty. When we are above Muñón Fondiru the track forks, the path on the left does not lead to Muñon and the one on the right takes us along a rocky path to the Barriu de La Crespa in La Pola, Lena.

We leave La Pola, Lena through the La Caleya neighborhood in the direction of Fuente L’Ablenu. From here, along the royal path, we will pass through the lower part of the town of Palacios, next to a mill that is still in service today and next to the Fuente Vieya. We continue to the Hermitage of La Flor, a chapel with inscriptions from the 15th century located in a beautiful meadow. We cross the river and begin the ascent along a track that will take us to a rocky path that goes into an interesting chestnut forest.

We continue climbing, leaving the Peña Llarga crest to the left as far as Colláu de Villares. In this area of ​​cabins we can contemplate interesting views of the Sierra L’Aramo and the upper part of the Naredo River. We will take a track that goes down, passing near some old mines until connecting with the road that comes from Tablao. Shortly after, taking the royal road again that turns to the right, we arrive at Preu La Flor and return to La Pola, Lena along the path we have already walked.

We leave La Pola, Lena along a path that goes to the right of the cemetery. We enter the forest, where we can see the remains of the plane where the coal that came by train from Morues came down. We arrive at Cuamoros, now uninhabited, and climb up a stony path until we join the track that comes from Muñón to Roces. We follow the track always heading west, arriving at Mayéu La Escrito where we can get water.

We continue along the same track to Mayéu Ablaneu, where the tracks coming from Brañalamosa meet. We continue up a steep slope and arrive at a cabin. At the spring that is next to it, we leave the track and climb between holm oaks and bushes directly towards the summit of Coguchu.

From here we descend towards the Valle Peral recreational area and continue along the track heading south for about 2 km. Here comes a path that goes down in the middle of the forest to Tablao. We continue down the road to Morues, where there are still remains of the old loading area and as soon as we pass it, we take the path to the right that takes us to the hermitage of La Flor. Following the river along the royal path, we arrive at La Pola, Lena.

We leave the top of La Cobertoria heading south along a path that runs along the divide between Lena and Quirós. Shortly after we reach the Felguerina collá where two tracks meet, we continue straight ahead and enter a forest of beeches and huge holly trees. We pass the Collada de la Potrera and continue to a crossroads where we take the track to the left that brings us closer to the remains of an old mine. After a pronounced curve, a path emerges to the left that leaves us at a hill with a pond where little by little, dodging the holly trees, we ascend to Brañavalera.

Here we can enjoy spectacular views of the Ubiña massif and the Güerna Valley.

We descend to the mayéu Brañavalera and take the track that goes down, we continue until we find a deviation to the left that brings us closer to a braña. From here, first a path and then again a track brings us closer to Ronzón and Sorríbas where by road we go down to La Vega’l Ciigu and La Pola, Lena.

The Las Ubiñas – La Mesa Biosphere Reserve is made up of the municipalities of Teverga, Quirós and a part of Lena. It stands out for its high biological and geological diversity, perfectly preserved. Extensive native forests of beeches, oaks, birches where bears, wolves, chamois, deer and a long etcetera of animals live that find their perfect habitat in this natural park. It constitutes a vital area for the survival of the brown bear.

On our walk through the park we will find viewpoints with wonderful panoramic views of the reserve and its relief of pronounced contrasts: mountains of more than 2000 meters are interspersed with beautiful valleys crossed by rivers of this Caudal basin.

Senda del Oso (The Bear Trail) – The Senda del Oso is one of the best routes you can do in Asturias. Taking advantage of the layout of an old railway and with little difficulty, it can be done both on foot and by bike and is recommended for adults and children. We recommend doing it in the direction of descent from Entrago (where you can rent a bike) to Tuñón.

The path that runs through native forests will take you through the Valdecerales gorge before reaching Caranga, the midpoint of the route. From there, you will go through the beautiful Peñas Juntas gorge to reach the bear enclosure, where the bears Paca and Tola are the protagonists. The end is in Tuñón, after 20 km of a very special route that you should not miss.

Desfiladero de las Xanas – Considered the little sister of the well-known Ruta del Cares, it is for many hiking enthusiasts an even more beautiful route, with a great variety of ecosystems and suitable for all ages. The route runs through a canyon formed by the Trubia River where we will find tunnels, bridges and a large number of natural springs, as well as lush forests.

La Xana is an Asturian fairy that lives in the caves of the rivers and in the fountains and that seems to accompany us at every step. Another magical route in the heart of this paradise that is the Natural Park of Las Ubiñas – La Mesa. 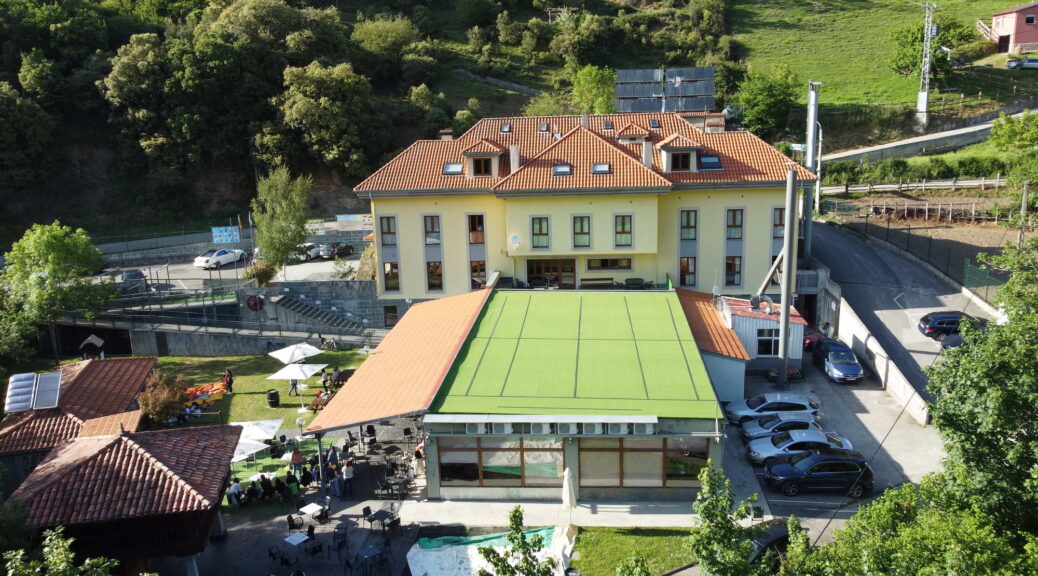